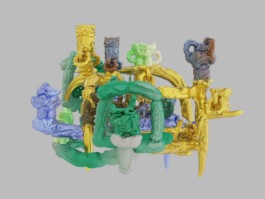 Today we talk with Nina Yashar who is thrilled to announce the new project Scale to Infinity by Audrey Large, member of FAR 2021, curated by Studio Vedèt.

COLLECTIBLE: Scale to Infinity is an intriguing new virtual exhibition by Audrey Large. It is commissioned by Nilufar and co-curated by Nina Yashar and Valentina Ciuffi from Studio Vedèt. Could you describe where this project finds its origins and how it came to life?

Nina Yashar: The project was born in recent months, during the lockdown, because talking with Audrey Large we were thinking about the realization of an exhibition of her works. Given the historical moment and her attitude towards the digital world, came out the idea of an online exhibition which translated in this perfect synthesis of real and virtual, the result of which we are all enthusiastic.

“ Scale to Infinity is a concept before being a project. That's why I really love this work and what's behind it.”

C: The virtual exhibition does not aim at being a simulation of the real experience. The distinction between the real and digital for Scale to Infinity does not seem to be the main purpose. How do the two find an interplay, a connection?

NY: The virtual exhibition is not meant to be a simulation of the real experience. The two plans for Audrey remain separate, and each gives rise to different forms of the same work. In the virtual world there is room for many transfigurations, different visions and a particular perception of the work. In reality, however, you can experience a particular virtual moment, which has given rise to a paradoxical and unique object.

C: Questioning the nature of objects plays a constant role in the work of Audrey Large. How do you feel the digital realm interacts with physicality in her global practice?

NY: In Audrey's practice, the transition between digital and material occurs seamlessly: she renders these files into digital images that she prints on paper, and then exports and 3D-prints. Then she draws the 3D-printed object on paper and makes a new 3D model out of the same elements, to afterwards draw it again, and 3D-print it again. This arbitrary and liberating sequence does not seem to detect boundaries between real and virtual, between what physically exists and what is limited to appearing.

C: Scale to Infinity is a precursor to a larger body of works.  How do you foresee the evolution of this project? Which philosophical directions would you like to explore? Concretely, could we have a glimpse into the tangible developments of Scale to Infinity for Audrey Large’s upcoming exhibition at Nilufar gallery in September?

NY: Scale to Infinity is a concept before being a project. That's why I really love this work and what's behind it. Audrey is working on the presentation of a unique piece that contains the different elements and which we will present in September in the gallery in via della Spiga. Surely then there will be other evolutions, but they are still in progress. 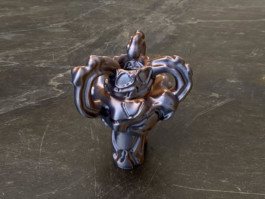 Starting from the end of the Nineties, Nilufar Gallery, founded by Nina Yashar, knew how to carve out its own space and become the reference point to lovers of historical design as well as to people following the evolution of contemporary design, above all within that more learned, poetic and visionary area shifting between production and contemporary art. Nilufar has its own small manifesto, composed of three words: Discovering, Crossing, Creating.