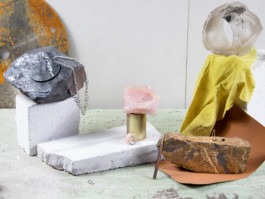 This new series, Design bites, unveil the backstage of contemporary creation. Tackling various topics from personal designer processes to the position of Collectible design on the global design market; these bites offer different views to suit all tastes. Today we talk with Studio DO.

COLLECTIBLE: How would you describe the boundary between functional art and collectible design? Where do you situate your practice between those two?

Studio DO is a collaboration between artist Octave Vandeweghe and author jeweller Dana Seachuga. Octave’s artistic work could be considered art on the border with design. However his work is dealing often with functionality, there is absolutely no practicality in it. On the other hand, Dana’s artistic jewellery works are wearable sculptures just on the border of being wearable, but not that practical. Both solo practices are closely related to functional art because of the themes they are researching.

With Studio DO the focus is rather on the role and actual manifestation of the functional and practical. Function persuades art, while art defines the border of the function. The objects are practical till a certain level since the visual and conceptual aspects of the making process still have higher priority to be able to communicate the object’s life story.

A blunt example is our Sodalite Tulip Vase. Although the elementary function of the vase is fulfilled, its weight and design make its practicality submissive to its statement. The references to the Delft tulip vases and a rocky nature scene, together with the stone’s properties, the plain making attitude and the interventional composition, parade in this straightforward design and show off how theatrical and natural a vase can be.

Another example is the Heliotrope Chunky Bracelet. One could debate the functional character of jewellery in general and claim it to be ornamental or even classify it as art. This bracelet has all features to be wearable, however, its weight, shape and material shift the importance of being practical or comfortable. It becomes an artful statement to wear on the body and to display it in an interior in its rock of origin.

Thus functional art for us is a source while being collectible design is a result. 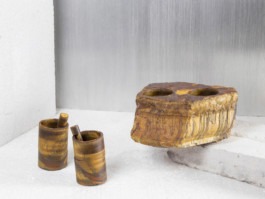 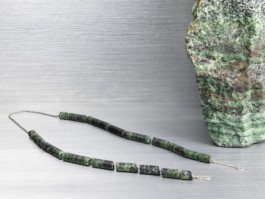 “ Collectible design is a term that nowadays could be seen as a way of dealing with the confrontation between function and design in our current culture and society. ”

C: Can you talk about a new piece or a collection that you release for COLLECTIBLE SALON?

SD: Our new Vessel collection is a direct continuance of our jewellery project and broadens. By extracting cylinders and tubes from a raw rock or crystal, we generate vessels of all kinds.

The basic intervention and appearance often turn the somehow ancient archetypical model into a contemporary interpretation. The initial object series of this project is revealed here at Collectible Salon for the first time and contains vases and beverage vessels. Alike jewellery, vases are objects of adornment, only now for the domestic space instead of the human body. On the other hand beverage vessels still relate as well to the human body, now with a different function. The Fractured Tiger-Eye Espresso Cups, are in such a way still very close to our jewellery project. The applied principle and physical interaction you experience is similar.

Dealing with food demands to investigate new matters such as heat resistance and food competency in relation to (gem)stones. Tiger Eye is a silky lustrous gemstone that is commonly found in sizes still suitable for small vessels. It has a golden to red-brown colour that makes drinking espresso, a unique sensation.

C: What have you been up to recently? What are the next projects or exhibitions you wish to highlight?

SD: Our debut project, ‘Gemma ex Lapide’, evolved around the role of (gem)stone within jewellery. Along with the research, designing and making for this project, our curiosity grew bigger towards other close related contexts. The follow-up project ‘Vessels’, we are now presenting for the first time, consists of table-wear and flower vases. The first, still relates to the human body, but with a different function. The second, is also an object of adornment, now for the domestic space instead of the human body. However the Vessel project is still in the run, we are already releasing an object at Collectible Salon that showcases our interest to make a series of mirrors.

Gemstones and minerals have fascinating properties we want to explore further, but each kind has its own stubborn character. Taming stones to get a mirroring appearance is often challenging and therefore demands extended research and experiments. Despite the lurking stage of this series, the Pyrite Cumulus Cloud Mirror reflects the first wonderful result of this upcoming subject.

C: Where do you take your inspiration from?

SD: The objects of our label are a direct result of being a labour driven studio. While working with stone for rather traditional commissions, new stone related insights appear all the time. However our studio develops towards a wider sense of what stone cutting is and can be, in our origin, we are gemstone cutters. We find advanced impulses, in reinterpreting the craft of cutting gemstones, by fusing it with neighbouring crafts such as stonemasonry, ceramics, gold- and silversmithing, ... Connecting such insights with historical and contemporary objects, generates powerful dialogues, which leads to new concepts. For instance, with the Smokey Carafe and Frosted Rock Crystal Shot Glasses, we move away from jewellery but still work with precious gemstones in a similar way.

More general, our ideas often come to existence after recognising the beauty of a basic technical action and its mundane result. The basic interventions generate basic forms and give way to a fated function. Traces and faults of the raw material and the making process are kept, or even enhanced, and often play an aesthetic role within the final object. When looking inside the carafe and shot glasses you can clearly see the stages of the process of how the object was made.

In this way, the outcome showcases the relation between the chosen object and the rough material it is made from. We seek for the core relationship between stone and (varied) objects by carefully balancing between aspects such as heritage, function, aesthetics and the potentiality of a found raw material. And so, we deliver objects adorning the body and domestic environment in various manners. As in this case, the smokey quartz and rock crystal for drinking vessels, bring classical gemstone objects back from heritage into the contemporary interior. 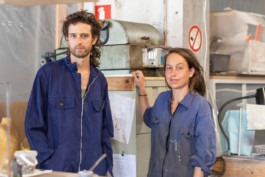 Based in Antwerp, Studio DO is a stone cutting atelier founded by Dana Seachuga and Octave Vandeweghe. Driven by their affection for stone cutting, they research the material and cultural role of (gem)stones within the realm of functional objects.

We use cookies to ensure that we provide you with the best possible experience on our website. By clicking on "Accept", you agree to the use of all cookies. For more information, please read our Privacy Policy.AcceptRefuse