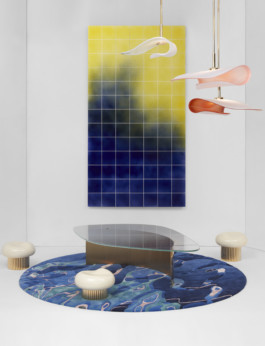 This new series, COLLECTIBLE In-Depth, unveil the backstage of contemporary creation. Tackling various topics from personal designer processes to the position of collectible design on the global design market; these COLLECTIBLE In-Depth offer different views to suit all tastes. Today we talk with Jennifer Midoz from MYDRIAZ.

For the design market, collectible design offers a new field of possibilities, a new space to invest in, and a fusion of two forgotten worlds. The collectible design object today is found in the gallery, on the same level as art objects: "Functional Art". With a very varied price range, the general public can invest in functional  collectible objects. It is not for nothing that IKEA has launched its own collectible design collection (IKEA ART EVENT 2021)! This is proof of a growing interest in this movement on a larger scale.

MYDRIAZ places sensitivity, finesse and lightness at the heart of its philosophy.

C: Can you talk about a book you recently read that inspires you?

Jennifer Midoz: After visiting the exhibition dedicated to Anni and Josef Albers at the Museum of Modern Art in Paris, I read the book "En tissant, en créant” by Anni Albers, published in France by Flammarion, which brings together a series of texts and essays on her research and her creative work. I was overwhelmed with Annie Alber’s mastery as a designer after reading this book. Through her research (of weavings, knots, wefts, colors), she developed and built a creative thought that transcends the notions of art, craftsmanship and industrial design.

C: Can you talk about a new piece / collection that you release for COLLECTIBLE this year?

JM: This year we are presented an edition of hand-tufted rugs, for the first time.

The collection is called Liquide, and the carpet presented is called Lumière Noire. It is a carpet of 2 meters in diameter in silk and wool. Wool, being matte, plays with deep blues and silk brings light to pale pink and turquoise.

The pattern comes from a creation born in our workshop, also called Liquide, a plate sculpted by hand. It is then polished to give the appearance of a water surface. Following a photo shoot where pink and blue neon lights illuminated the Liquide wall lamp, we had the idea of ​​working on this notion of reflections and colors with a new material that we had never worked on until now, - textiles.  The Liquide carpet series was born with Lumière Noire, which plays on ultramarine blue and powder pink, Essence with metallic reflections, and Mars, which is made up for subtle shades or earthy red.

C: If you were to collaborate with someone outside of the design scene, from another industry, who would you pick?

JM: I dream of collaborating with a filmmaker. Recreating an entire universe entirely imagined and created in our studio in collaboration with a director would be a unique experience. Beyond creating objects, we could imagine the staging and the photography (the light on the set). Thus, the associations of Hans Ruedi Giger and Ridley Scott, for example, have produced anthological films like Alien. In France, the director Bertrand Mandico is a fine example of an inventive filmmaker with a singular style with who we would love to work with.

Founded in 2011, MYDRIAZ is a creative studio specializing in the custom design of decorative lighting, monumental installations and furniture made of brass.

From the first sketch to the installation the creators are involved in all stages of production.

Elegance, balance and harmony are at the heart of their aesthetic endeavors.

Striving for the convergence of artistic and craft disciplines, their work around lighting and furniture combines traditional manufacturing methods with contemporary techniques. Between high standards and avant-garde research, MYDRIAZ places sensitivity, finesse and lightness at the heart of its philosophy.

We use cookies to ensure that we provide you with the best possible experience on our website. By clicking on "Accept", you agree to the use of all cookies. For more information, please read our Privacy Policy.AcceptRefuse